Brutal but beautiful. Review of the Grand Massif and skiing in Flaine

Why am I surprised?

You can ski as much as you like in Flaine, but you only fully appreciate its unique qualities when the fresh snow falls and you are heading towards the town. In the silent whiteness, with brutal buildings suddenly rising out of the mist and snow, this pedestrian resort is striking.

The kind of surprise that sends shivers down your spine.

The kind of scare you find in art films.

The kind of scare you don't often find at a ski resort.

But this kind of surprise is not accidental. It took a lot of work. 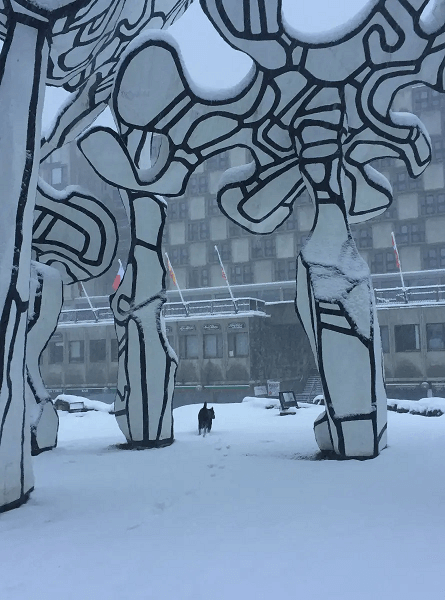 Why such a "brutal" appeal?

In the 1950s, two mountaineers had a happy moment when they stumbled upon a remote area in the heart of the Giffre. What a place for a ski resort! The men called on friends of friends to get the project off the ground and Eric Boissonnas asked the founder of the Bauhaus, Marcel Breuer, to help him create a cultural centre and an open-air museum.

They abandoned the traditional Savoyard style in favour of the architectural principles of the Bauhaus, but kept in mind the wild nature of the area, operating the plans with light, running the wires underground and separating the stations so that each could not be seen by the other. The resort was designed for skiing in ski out, and the slopes follow the contours of the mountains.

The lift infrastructure was state of the art at the time, and some of them still exist today. We like the white square cubes of the circulating gondola called Télébenne. You literally have to take an ascent to get there, which is interesting in ski boots! The ski slopes were designed by Emile Allais, founder of the French Ski School.

The station has experienced schedule and budget overruns.

It was definitely a labour of love.

So, does it stand the test of time?

Currently celebrating its half-century, Flaine has retained its brutalist style and integrity. In an ocean of traditional French alpine resorts, Flaine does things its own way. Like a good ski, its edges are so sharp you can cut yourself. Not to everyone's taste, but if you like brutalist architecture, you'll appreciate its attitude.

And you won't be satisfied with just appreciating her appearance. Its location is also convenient; Flaine is one of the closest seaside resorts to Geneva airport. We land, take a car and check in to our apartment a few hours later, arriving in a gust of snow. But as we climb up and around the hairpin bends, passing the traditional wooden houses of the Carroz, we wonder why the founders decided that a basin at the end of a dead end would make a good ski resort?

We discover it a few hours later when we take the cable car up to the summit of Les Grandes Platières at an altitude of 2,500 metres, from where we have a 360-degree view of the Mont Blanc, Aravis, Belledonne and Jura ranges. The view is impressive and the weather is as clear as the bell that regularly strikes in the ecumenical Bauhaus-style church.

How is the snow in Flaine?

A mantle of powdery snow lies all around us. A cheeky Mont Blanc gushes from the cloud around us. And over the course of a week, as we move around the resort, we begin to notice that the base of the cloud is constantly there, and we are constantly on top. It's as if the mountains are floating in a sea of soft cotton. Flaine is part of one of the five largest interconnected ski areas in France, the Grand Massif, which also includes Les Carroz, Morillon, Samoëns and Sixt-Fer-à-Cheval. The slopes of the wide basin of Flaine are mostly north-facing, giving great powder snow.

Sébastien, who is helping us to equip ourselves for Sport 2000, tells me that the good weather is characteristic of the resort; he and his colleagues ski most days of the season.

"Rain is not Flaine," he said solemnly.

Later, the icy sun and powder conditions are personified by the theatre artists who give me a hug and a selfish hug, after watching the fireworks open the night sky.

How is winter in Flaine?

In summer, as we discovered when we spent a week in Flaine for outdoor sports activities, the resort is green and colourful, with touches of art adding to the vibrant palette of nature. In winter, it is painted monochrome, with moving trails of colour provided by the luminous sleds of the families who gather daily to ride the snow around Le Boqueteau, and the distant pixels of skiers and snowboarders.

But the colours also come in the form of blue, green, red and black tracks. The resort lies in a natural circle of peaks at an altitude of 1600-2500 metres and one of its most famous slopes, Les Cascades, stretches 14 kilometres off-piste through the forest to the village of Sixt Fer à Cheval (Don't panic at the thought of walking home, you can take a bus back to the Samoëns cable car). La Combe de Gers, Les Lindars and Les Pentes de Veret offer marked and unmarked ski areas.

For our teenagers, who have a high intermediate level without knowing how to ski off-piste, we find this area less varied than the gigantic playground of the Three Valleys, but there are easily enough red runs to keep us busy for six or seven days. You can spot the 25 red runs by their evil names, while the five black runs are named after mountain ranges.

Our best ski slopes in the Grand Massif?

We start with a selection of the 64 pistes and 24 lifts in the resort, then move on to the other resorts in the Grand Massif. Our favourite runs of the week are Sortilege, (a fast red one), Faust, Mephisto, Marmotte and Tourmaline, which can be very busy and bumpy at the end of the day. Sometimes we split up and end up in one of the resorts. Sometimes we do easy errands like Serpentine, just for fun.

Flaine offers the rare opportunity to tour a ski area using only blue runs, and complete beginners don't have to invest in an expensive lift pass - there are four free lifts in the resort, which include three magic carpets. And there are three reserved and easily accessible areas for beginners. Parents will appreciate the fact that the resort is car-free; you are entitled to a 90-minute stop to unload and a free bus helps you get around.

How much fun can you have in Flaine?

There are fifteen fun zones where you can have fun. Many of them are still closed when we go there, as it is very early in the season, but on the way back to our apartment, every day we surf in the Ze Balaken entertainment zone (accessible by the Gérats chairlift) and have fun skiing under the legs of Balaken the octopus and his friends.

We also loved the devilishly fun facilities on the Zizi Panpan piste (near the Chariende Express chairlift.) To get there, you have to go through the Luge restaurant in Teran, and frankly, it would be rude not to stop for a hot chocolate next to your wood stove.

And at some point we find ourselves skiing under the palm trees in an oasis, which is a novelty in a winter sports resort.

What else can we do?

On a previous visit to Flaine, I made a jump from the mountain to Les Carroz with Parapente Planete, and this activity is also available during the ski season. There are three toboggan runs where you can have fun sledding and you can do dog sled races. Or if you want a larger vehicle, try the ice driving school or a quad experience. And if your teens just want to chase after the best place to have fun, there are plenty of possibilities for that.

There is a reasonable mix of fast food and pizzerias in Flaine and the usual chain of mountain restaurants. If you like buffets, head to the renovated Totem Hotel Snow Terminal. They offer an evening feast at a fixed price that won't break the bank and their café is one of the best in town with many comfortable seats in front of a real fire.

Some of the apartment blocks in the resort have restaurants offering reasonably priced raclette. We have one last crazy night at the Pierre & Vacances restaurant Les Terrasses d'Hélios. On weekends, especially at rush hour, you have to book in advance and we were only able to get a seat at 6pm in two of the restaurants.

For a wider choice, try the town of Carroz, further down the mountain. And if you return to Geneva airport, Samoëns is well worth a half-day visit. If you're there at Christmas, your children will love the living crib in the centre.

We flew from Manchester to Geneva, renting a car on the Swiss side. Don't forget to ask for a ski rack and snow chains if you plan to go to different resorts. Vehicles rented on the Swiss side are usually equipped with winter tyres.

We rented our ski equipment from the excellent (and very patient) Sport 2000 staff at Flaine Forum. (There is also a branch in Flaine Forêt.) The company has been renting equipment in the resort since 1982 and everyone speaks English. It can also provide coaching and mountain guides. Don't forget to ask for a helmet for children.

SEE ON THE MAP


Your email has been registered
Oops! Something went wrong while submitting the form.

Thank you! Your submission has been received!
Oops! Something went wrong while submitting the form.

In accordance with the law "Informatique et Libertés", you have the right to access and rectify data concerning you, and to oppose their processing. To find out more about this right, click here

By continuing to browse this site, you agree to the use of cookies or other tracking devices to provide you with a better browsing experience, targeted messages, and for statistical purposes.

To know more about it

BOOK NOW
Ask to be called back

Thank you! Your submission has been received!
Oops! Something went wrong while submitting the form.

In accordance with the law "Informatique et Libertés", you have the right to access and rectify data concerning you, and to oppose their processing. To find out more about this right, click here